In the week before the signing of the Armistice and the end of the war, the New Zealanders were fighting in Northern France. Their last major action was the liberation of the medieval fortress town of Le Quesnoy.
Telegrams of the New Zealand losses at Le Quesnoy were received after the end of the war had been celebrated – devastating news so close to the end. One of the longest serving soldier's to be killed was
10/135 Maj. Hugh McKINNON MC. 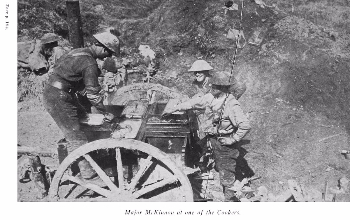 Hugh McKinnon came from Greytown. He left with the main body in 1914 and served with the Wellington Regiment. He was at the Gallipoli Landing, and fought on Chunuk Bair, he was decorated for gallant service on the Somme and again at La Basse Ville. He had been promoted to Major in September 1918, but on 4th November he was killed by a shell  and is buried at Le Quesnoy.
WE WILL REMEMBER THEM