Home > Events
Here we provide you with significant dates of note for Fields of Remembrance. Please refer to the organisations and/or council in your regional or local area for specific details of the commemoration services that are planned.

20 October - 21 November
Field of White Crosses on display in the Auckland Domain.


18,277 crosses are named for each New Zealander who died in World War I. The field was arranged by year with a separate 'Brothers Field' commemorating those families who lost more than one family member. A series of Light Boxes illustrated New Zealand's involvement in World War I.

“There were songs and cheers, miscellaneous pipings and blastings, and tootings and rattlings—a roaring chorus of gladsome sounds.”
Armistice celebrations in Wellington described in The Evening Post, 12 November 1918

Another highlight was the superb speech by Fabbiana Mazza-Carson, Fabiana is in her final year at Kings College. Over the past three years she has debated for Kings at the highest level.
You can read the full text of her speech here

At the eleventh hour of the eleventh day of the eleventh month in 1918 an Armistice was signed which ended the First World War. To commemorate the one hundred anniversary of Armistice Day the Trust is establishing a field of over 18,000 white crosses, each bearing the name of a man or woman who lost their life in the conflict.
The crosses will be on display in the Auckland Domain.
Proposed dates for the event are - 22nd October to 21st November 2018.

The Field will be positioned below the Court of Honour and Cenotaph in front of Auckland War Memorial Museum. The crosses will be laid out by year of death 1915, 1916, 1917, 1918 and those who died of illness or wounds up to 1921.
Each cross will list the service number, rank, initials, surname and any honour/award won.
A separate field will remember those families who lost more than one family member - nearly 700 mothers lost more than one son. This field will be positioned by the lone Gallipoli Pine and be surrounded by poppies.
At the end of the commemorations crosses will be made available to families, and then to any community groups, schools, RSAs who may wish to collect them.

ANZAC Day
25th April 2018
ANZAC Day commemorations will be taking place in communities across New Zealand, many will mark the occasion with a field of white crosses for their men who served in the First World War and subsequent conflicts. In the main centres the Field of Remembrance Trust has supplied named crosses for the men from their region who made the ultimate sacrifice.

Some of the crosses commemorate those who died in the years immediately following the end of the War from wounds or illness contracted while on active service. Those of the Jewish faith are remembered with a Star of David.

They shall grow not old, as we that are left grow old:
Age shall not weary them, nor the years condemn.
At the going down of the sun and in the morning,
We will remember them.

Note - DUNEDIN will not have any crosses on display this ANZAC but will have a field of 3,988 white crosses to commemorate Armistice Day, 11th November, and the end of the First World War.

The British offensive known as the Third Battle of Ypres began on 31 July and ended on 10 November 1917. New Zealand troops main involvement was in the battle of Broodseinde on 4 October and First Passchendaele, fought just over a week later on 12 October. The one hundred anniversary of these battles will be commemorated:
1 October 2017
Passchendaele lapel pins are available for sale in ANZ Bank branches.
4 October 2017
Centenary of the Battle of Broodseinde

AUCKLAND - Mates on the Field
This major battle was a prelude to the disastrous battle just 8 days later on the 12th October 1917. It was a highly successful attack but still the casualties were high especially for Auckland Battalions. 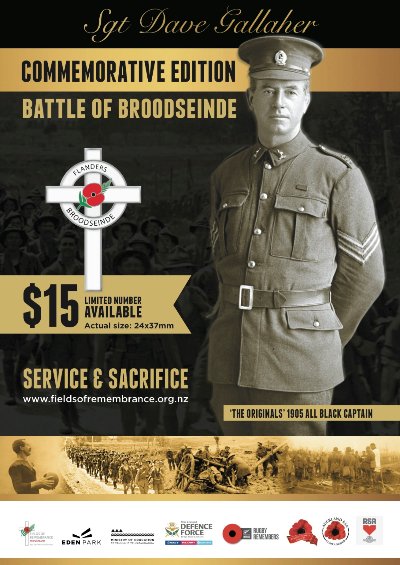 One of those killed was Dave Gallaher, who captained the All Black Originals on their celebrated 1905-06 tour of Britain. The Trust together with Auckland RSA and Eden Park Trust will have a commemorative day of activities at Eden Park honour him and the 492 who died on this day 100 years ago.
View a video of the highlights of this event HERE
12th October 2017
Centenary of the Battle of Passchendaele 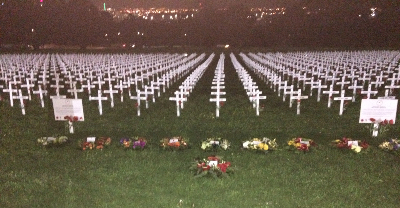