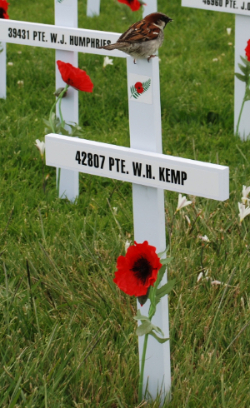 Fields of Remembrance mark the end of WW1 Centenary

1918 was the final year of World War One but it was also one of the costliest with over 5000 New Zealand deaths during some of the bloodiest campaigns of World War One, including the New Zealand Division playing its part in stopping the German Spring Offensive on the Somme in March 1918 and the One Hundred Days from August 1918 leading up to the liberation of Le Quesnoy, just a week out from the Armistice on 11 November 1918.
To mark the Centenary of the Armistice, on 11 November 2018, a national Field of Remembrance containing 18,277 crosses, one for every New Zealander who died, will be installed in front of the iconic Auckland War Memorial Museum. This Field will be complimented with a dedicated Field honouring those families who lost one or more brothers and a commemorative walk around the Court of Honour in front of the museum with a series of interpretive light boxes.
The Fields of Remembrance Trust also is proposing and encouraging the regions, communities and schools (in 2016 with the Ministry of Education 100,000 crosses were supplied to primary and secondary schools as wellas early childhood centres) to mark this final commemoration and to honour their memory by installing Fields of Remembrance across New Zealand, commencing on 20 October and ending on 21 November 2018.
David McGregor, Chairperson of the Fields of Remembrance Trust, comments that,
“Over the last five years the Fields of Remembrance in cities, communities and the country’s schools have raised awareness across the current generations of the service and sacrifice of New Zealanders 100 years ago.”
“In this final year of the World War One Centenary we call on all New Zealanders to actively take part in their local Field of Remembrance by installing them in conjunction with Armistice Day 2018 and at the end of that commemoration agree to the distribution of the crosses to ensure the ongoing legacy of establishing Fields as a fitting way to remember the fallen in service of their Country.”
Ka maumahara tonu tātou ki a rātou
We will remember them
It is the wish of the Fields of Remembrance Trust that the distribution of the crosses at the conclusion of Armistice Day 2018 be on the basis that the first priority be families that wish to uplift the cross of a family member followed by any surplus being available to any school within the regions (to supplement the crosses already retained by them). Wellington has already completed this honour by handing back its crosses to relatives as the close of its Field Of Remembrance Anzac 2018. Therefore will not have an Armistice Field.
Since its inception the Fields of Remembrance Trust has interacted with a wide range of kindred community groups within the regions. These community groups should also be included in the arrangements to distribute crosses at the end of the commemorations.
The Royal New Zealand Returned and Services’ Association (RNZRSA) and the New Zealand Defence Force (NZDF) have been an integral part of the of the achievement of the Trust during the commemorative period. It is the desire of the Trust that both the RNZRSA/Local RSAs and the NZDF retain their crosses and continue to establish Fields of Remembrance in conjunction with Anzac Day and Armistice Day commemorations in the future.
Ultimately, it is for the regions, schools and community groups to determine the distribution of the crosses at the end of the commemorative period because the Trust has gifted the property of the crosses to the regions. The Trust is most receptive to ongoing discussion with interested parties in respect to this issue.
The Auckland RSA, the Royal New Zealand Returned and Services’ Association, representing all local RSAs, and the Passchendaele Society, established the Fields of Remembrance Trust in 2012. It is a registered charity.